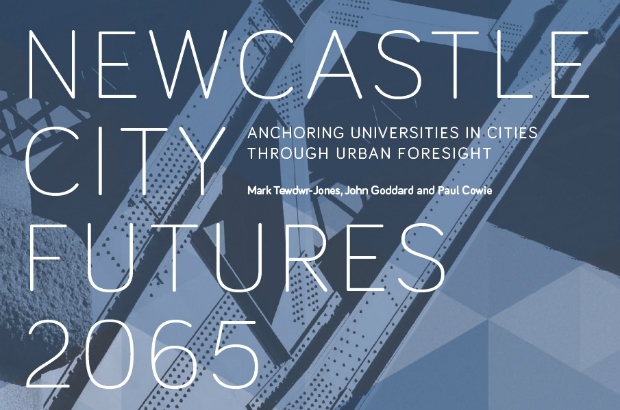 July 2015 saw the publication of the Newcastle City Futures 2065 report. The project was funded by the Government Office for Science and progressed by Newcastle University as a collaborative engagement project. It aimed to pilot a foresight methodology which is capable of being applied within a city region by mobilising the intellectual resources of universities and their local stakeholders.

The project aimed to work with local partners and national bodies in establishing a review of key research applicable to the city region. It sought to establish a transferable methodology through which expertise in local universities could be mobilised on a sustainable basis and focused on the long term future of the city region. The intention was to develop long term thinking capacity in the partnership around future urban dynamics.

The first challenge was to identify boundaries. Although the title of the project specifically identified Newcastle, any study on the future of the city cannot ignore the wider urban region within which a city is situated. Accordingly, the project team took the space and flows of the metropolitan area – equivalent to Newcastle, Gateshead and Tyneside – as the basis for analysing the city.

The second challenge was to think about scope. The project took a broad and overarching look at the future of cities over the next 50 years using Newcastle upon Tyne as a pilot. A method had to be devised that was cross-sectoral, inclusive, and long term, could be supported by existing research and intelligence, and identify new opportunities for both the city and higher education in the process.

Newcastle was the first city in the UK to receive a visit from Sir Mark Walport, and the Foresight Future of Cities team, in December 2013 and it was also the first city to undertake a foresight approach as part of the UK project. The Newcastle study had to step into the unknown, and generate significant amounts of trust and goodwill in order to progress the work by developing partnerships with private, public, community and voluntary sectors in the city. With no other existing governance or policy mechanisms in existence to create a long term study on the future of a city, significant attention was paid to devising foresight processes that could be utilised and embedded within Newcastle beyond the lifetime of the project.

The success generated by the project was principally because of the ways the Newcastle team attempted to be as inclusive as resources and time allowed, to hear the opinions of all those who could be affected by decisions taken on the future of the city. The project:

The Newcastle City Futures 2065 project sought to develop new approaches and methodologies for universities to act as anchor institutions for cities by mobilising their expertise and community engagement around the future of their cities. Since the publication of the report, Newcastle has led the way in capitalising on the goodwill and consensus achieved by the project. It has established a City Futures Development Group made up of representatives of all the sectors in the city region; it has generated new policy engagement and research platforms between local government and higher education; and it has led to new partnership for knowledge exchange between the university and a host of different organisations, all of whom are passionate about the future of Newcastle.

The challenge is to meet the rising expectations within and across cities that will come over time; and to deliver a wider range of sustainable benefits based on the unique place assets evident in cities. At a time when citizens in cities can often feel remote from policy-making, there is a particular need for more coherent and consistent approaches to generating engagement and participation processes across entire urban areas relating to change, by remembering the past, being confident about the present, and looking forward to the future.